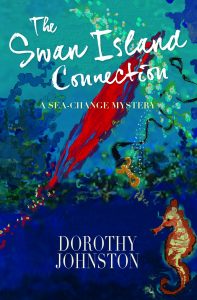 The Swan Island Connection, the second of my sea-change mysteries, will be launched in Queenscliff, Victoria, in October. Thanks to everyone who’s helped me get this far, and a special thanks to my publishers, For Pity Sake. It’s possible to order a copy from them now.

The Swan Island Connection features senior constable Chris Blackie, in charge of the small, some would say redundant Queenscliff police station. Anthea Merritt is his young assistant, trained in Melbourne and reluctant to bury herself in a coastal town.

The plot revolves around the secret training base on Swan Island, close to Queenscliff, and the connection between soldiers training at the base, the local police and CIU, and an investigation into the death of a ten-year-old boy.

Though the existence of a training base on Swan Island was denied for years by successive federal governments, Brian Toohey and Bill Pinwell, in their book Oyster: the story of the Australian Secret Intelligence Service offer some tantalising details.

‘(On Swan Island) the eager young army officers and NCOs learnt the dark arts of demolition, disguise, deception, sabotage, secret communication, and assassination… In one exercise on Swan Island the incorrect line of fire was set on a Chinese medium machine gun so that tracer bullets shot over the sandhills into the rigging of fishing boats in Port Phillip Bay. Fortunately for ASIS the only complaint made to the media was about the noise…’

There’s a special kind of snail that lives in the seagrass of Swan Bay. Because the bay is so shallow, it’s an important fish nursery and the baby fish eat the snails. Marine scientists didn’t know why the snail numbers were decreasing. They did a study and found that the lead in the bullets has been turning all the snails into males. I don’t know the end result of this, but I’d hope that those organising target practice would find other, safer ways than firing into the water.

Local legends date from the time when regular army personnel were allowed to have their families living with them on the island. One woman recalls a birthday when she was a small girl, how she and her friends had gone for a walk in their party dresses and come upon a soldier in full combat gear lying in the marram grass. Another incident involved a night-time exercise, with trainees climbed across roofs and one inadvertently jumping down onto the family dog.

Part of the island is occupied by a golf club and my favourite story is about my mother and a group of critically endangered orange-bellied parrots.

Each winter the parrots used to fly across to Swan Island from Tasmania and my mother, a keen environmentalist and bird-lover, used to observe and record them. Sadly, there haven’t been any for the past few years. My mother was allowed permission to enter the golf club part of the island. One day, engrossed in her task, she didn’t realise that the birds had ventured into the forbidden zone. Following them, she was shocked by a loud voice bellowing ‘Stop!’ and three soldiers in combat gear running through the bushes. Mum was a small woman, though by no means a cowardly one. She stood still, clutching her clipboard to her chest, and explained politely that she was tracking the parrots who couldn’t read the Keep Out signs.