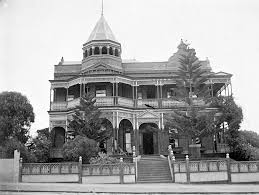 A Facebook page titled ‘Queenscliff Ghost Tours’ includes the following information:   ‘The Royal Hotel Queenscliff, built 1853, is known to be haunted by at least half a dozen ghosts..’

On another website, I found this testimony, written by a ten-year-old boy.

As I walked down the stairs with Terry, my ghost tour guide, I could feel the floorboards sagging beneath me, and the floorboards groaning above. When we reached the bottom step, we didn’t realise that the cellar of the Royal Hotel in Queenscliff, was actually once a morgue..

Terry told us what had happened one day when two men came down into the bar for a drink. They ordered their drinks and the bartender brought them over to the table they were sitting at. They were about to pick up their beers when they heard girls giggling and the next thing they knew, their beers were knocked off the table and smashed on the floor. It is known that the ghosts are the two young daughters of the Leigh family, who sadly drowned nearby and were stored in the basement overnight before their journey to Geelong, a day’s horse and cart ride away. It is believed that during this time their spirits escaped and now haunt the hotel running along corridors and giggling into the night.

Terry also told us about other ghosts, which inhabit the hotel, like the little girl who also sadly drowned in a natural well under the hotel. The well was bricked off, but sometimes a child’s footsteps are seen in the sand near where the well was located.

As well as being Queenscliff’s first morgue, the Royal was also a mental asylum for some years. The basement windows, small and high up, are still barred.

I’m having a lot of fun with my characters, which include a formidable psychic and tarot card reader; the present owner (fictionalized of course) of the house where HHR lived as a small girl; and the local police constable, who is, not to put too fine a point on it, out of his depth.

My favourite ‘Royal’ ghost has not been mentioned so far. It’s that of a young woman who jumped to her death from the hotel’s tower.

Here’s how I write about her in the novel, (working title Gerard Hardy’s Misfortune). My constable’s name is Chris Laker.

‘Before long, Chris supposed, someone would write a social history of Queenscliff, and include the Royal. The murder in the basement would become part of the town’s folklore, joining the story of the woman who’d jumped in despair from the window he was standing in front of now.

Every day for weeks, this woman – Chris had no name for her, but no doubt the social historian would dig it up – had climbed the tower stairs to watch for the ship bringing her lover to Australia.   It was before the days of steam. According to the versions Chris had heard – they differed in detail while remaining essentially the same – the woman had been allowed into the tower to watch. Apparently the staff had taken pity on her, but then she’d decided to stay there.

The staff had tried to coax her down, then fed her, made sure she had enough to drink. Then one night, perhaps spent and exhausted, perhaps driven to the last threads of self-control by worry and frustration, seeing at last the ship sailing through the heads, and knowing for certain that her lover wasn’t on it, she’d thrown herself from the window and smashed her body on the street below.

Chris decided that he liked this story. He liked the fact that he knew only the bare bones of it, and how there was probably a similar story for every on-the-surface-dull Australian country town. He liked how the nameless woman might have been a mental patient, kept in the basement behind barred windows; yet she hadn’t been. She’d climbed the tower of her own free will. The staff had let her keep her vigil and they’d tried to help.   He thought it said something about a raw frontier town, and also about kindness.’