I first came across Professor Charles May’s blog eighteen months ago and was immediately struck by the quality of May’s insights into the short story form. May has published 8 books and over 300 articles on the subject of short stories, and I Am Your Brother is the culmination of forty years of teaching and thinking about this often misunderstood and disparaged prose form. True scholarship, in the sense of being heart-felt as well as erudite, is unmistakeable, and I recommend this book both to readers and writers of short stories, and to those who have not, up until now, given them much thought.

One of May’s central concerns is that short stories have suffered in the past, and continue to suffer, by being compared, in a simplistic way, to novels; by being considered no more than bits of novels, constructed according to the same formal patterns and with the same narrative ends in view. He sets out to dismantle these false assumptions and he does so very convincingly.

Short stories have ancient ancestors, and have remained connected to their roots in the sacred parable, allegory and myth. The everday passage of time, cause and effect, the development of individual characters within a social framework are all hallmarks of the novel from the eighteenth century onwards. In the short story, because of its shortness, and because its writers started out with very different aims, time is just as likely to be compressed, or frozen.

In discussing Edgar Allan Poe’s approach to the short story, May points out that it ‘reflects the basic paradox inherent in all narrative: the writer’s restriction to the dimension of time juxtaposed against his or her desire to create a structure that reflects an atemporal theme. Because of the shortness of the short story, the form gives up the sense of real time, but compensates for this loss by focusing on significance, pattern and meaning.’

Important themes for me, in I Am Your Brother, are the sense of mystery to be found in the best short stories, how they give an outer shape to inner meanings, manage to convey what can’t be put directly into words and eschew so-called rational explanations. May quotes Flannery O’Connor who ‘once said that what the short story writer sees on the “surface will be of interest” only as it can be gone through “into an experience of mystery itself.”

From Boccaccio’s The Decameron up to the present day, May illustrates his points with pertinent and interesting examples. My knowledge of short stories and what makes them essentially different from long prose forms, has been greatly enhanced by reading this book.

Above is the text of my Amazon review of I Am Your Brother, but I thought I would add a few more personal thoughts about it on my blog. 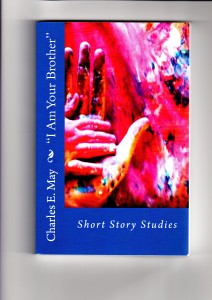 Having had eight novels published, and with a ninth (The Fourth Season) soon to be released, I am better known as a novelist than a short story writer. However, a few of my short stories have had multiple publications in anthologies and have found a readership. Two of these are ‘The Boatman of Lake Burley Griffin’ (Canberra Tales, Below The Waterline, The Invisible Thread) and ‘Two Wrecks’ (Best Australian Stories 2008 and Best Australian Stories – a ten-year collection, 2011).

The success of these stories, coupled with my experiment in self-publishing an ebook  collection, Eight Pieces On Prostitution, has got  me thinking about the place of short stories in my writing life.

Like many fiction writers, I always know when an idea is a ‘short story idea’, and I always hear, with my inner ear, before I set a word down, the tone of voice I will need to sustain. Needless to say, this is very different from how I begin the project of writing a novel. I have often been criticised, and, I am ashamed to say, too often bowed to the criticism, that my fiction is elliptical and indirect when it should be straightforward. I have often been asked to explain or clarify character and motivation when this was the last thing that I felt like doing.

Reading I Am Your Brother made me feel that my instincts were right all along, and that those criticisms came from perspectives and expectations that were alien to me, and to which I should never have tried to reconcile myself.

You can purchase an extra story, at no extra cost, from Authors Unlimited.

The story is called ‘An Artist’s Story’ and it formed the nucleus of my novel The House At Number 10. Paul Ham accepted the story as a stand-alone and then told me he wasn’t going to publish any more fiction.

I wish I’d known in time to include it in my ebook collection, but here it is now.