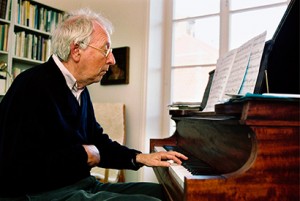 My father suffered from Alzheimer’s disease for a decade before he died in December 2001. For about half of that decade, he no longer recognized me as his daughter. My father lived with my mother at Point Lonsdale on the south coast of Victoria. I lived with my growing family in Canberra. My visits were infrequent. I could, and have, blamed myself for this. But almost till the end of his life, my father and I and I listened to music together.

Several areas of the brain are involved in our ability to remember music, scientific research tells us, and different localized brain regions are activated when we respond to music with opposite emotions, for example sadness, or happiness. I’ve written an essay about music and forgetting, and my father’s Alzheimer’s. If you’re interested, you can read the essay here.

While I was writing it, I was reminded of the different pianos I have played – and yes, played badly for the most part! Those memories didn’t fit into the essay; they seemed unwarranted digressions; but I’ve decided to give them some kind of outing in this blog post.

One time I arrived at Point Lonsdale by myself. I climbed the steps and knocked on the door.

My father opened it. ‘Who are you?’ he asked me.

At about the time my father forgot who I was, I started playing the piano again. I had learnt for three years as a child, from the age of eight till eleven. When I think about those music lessons, what I remember most is the unpleasantness of travelling to and from them, on an old, heavy bike, up and down Belmont hill. In my recollection of these rides, it was nearly always cold and often raining. The house was dark and the piano teacher grumpy. The piano was dark as well, with a winter lamp on top, alongside piles of music.

My clumsy hands seemed embarrassingly spotlit, and the smell of the face powder my teacher wore made me feel like choking.

Hers was an upright piano, as ours was at home, passed down through generations. It has never occurred to me till now to think of my piano teacher as living on the breadline, but she clearly was.

The piano belonging to my family is an old Randall upright, which my grandmother used to play before handing it on to her daughter, then to me.

That piano, in the house in Geelong where I grew up, sat in a sunny corner of the living-room. I hated practising and wanted to learn ballet instead, like my friend.

It is the melody in music, some researchers say, that makes our minds hold onto it the way they do. When I took up the piano again, thirty years after I had dropped it, it was to learn, haltingly and over several months, Schubert’s Impromptu in G flat Major, written in that extraordinarily productive year before he died. I could not play the piece at the proper speed; hence the melody was wrong. But my slower speed didn’t bother me. Indeed, I found it an aid to memory. Images of my father as a healthy younger man, a man who recognized his daughter, came into my mind unbidden, and were a comfort to me as I played. 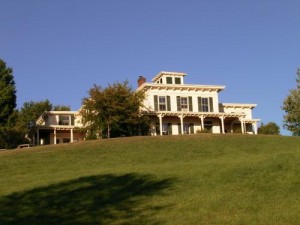 A few years ago, when I was staying at Ledig House, a writers’ residency in New York State, I discovered that, just before I arrived, the piano had been moved from the communal room, where it was okay to make a noise, to the ground floor of a barn that had been converted to living quarters. This floor held computers and a fax machine, but people slept and worked on the other sides of thin wooden walls.

Undaunted – I had asked beforehand if I would be able to practise the piano and was told yes, no problem – I asked the other writers if they would mind me playing for half an hour before dinner. Nobody objected. In fact, to my face they were very nice about it. But one evening, as I was sitting down to my allotted half hour, a team of young people arrived. Their leader, a robust, sunny-haired man, told me they’d been instructed to move the piano back into the main house. I knew why immediately, and it seemed, from the expressions on their faces, that the movers did as well. I wondered who had complained about the noise, and why the complainant had said nothing to me directly.

The piano at Ledig House had not been well looked after. The D sharp/E flat note didn’t work at all. During my stay, I learnt the whole piano part of a Schubert trio leaving out one essential note. But I took my music with me to Boston, where I’d been invited to give a conference paper. I could only afford to stay at the conference hotel for two nights, and the rest of the time I spent at the Boston YWCA. This remarkable building, with over three hundred rooms, is home to some of the city’s poorest women, quite a few getting about in wheelchairs, or walking the corridors with oxygen tanks on trolleys trailing behind them.

There were two pianos – one a grand in full view of the entrance foyer, another in a practice room in the bowels of the building, next door to the kitchens. This practice room was always in use. Guests booked ahead and lined up for a key at the front desk. All of a sudden, I had an E flat again. Thrilled by the soundproofing, I pounded out my trio.

The following year, I was lucky enough to be invited to another writers’ house, in Switzerland this time, at an eighteenth century chateau called Lavigny.

That piano was an old upright as well, hidden behind a screen in a corner of a living-room that was more like an opulent reception area filled with antique furniture. My piano and I shared our hidey-hole with a television set that nobody bothered to plug in and watch the whole time I was there.

Here is the living-room at Chateau de Lavigny during a reading. You can just see the screen on the left hand side, concealing the piano. 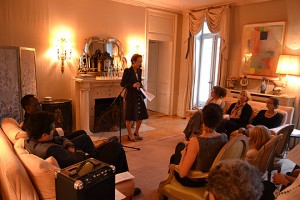 By then I’d moved on from Schubert to Chopin – of course, once again, far too hard for me.  My three weeks in Switzerland were spent learning his Nocturne in E minor. Though tucked behind the screen, the piano wasn’t far from the short-cut everybody took to the alcove housing the computers we used to check our email. (There wasn’t any wi-fi.)

When somebody went past, I stopped and waited. I always played softly, but this suited the Nocturne.

Now I sit at what has become my piano – no one else lays claim to it, or no one who is still alive – searching out the spaces between notes and chords. I count each rest, having lately bought a metronome, and wonder what resemblance mid-way silences have to the final one.

When I heard the Schubert Impromptu on the car radio and found the sheet music and decided to open a lid that had been closed for a generation, I didn’t think of my father immediately. Images came later, and most often when I paused with my hands just above the notes. Dad was never sick and old in them. The front steps up which I climbed to hear that unanswerable question were less worn.