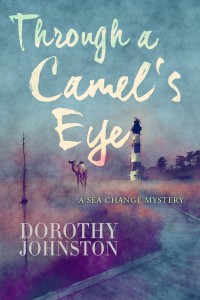 Through A Camel’s Eye, published by ‘For Pity Sake’ in 2016,  is the first book in a sea-change mystery series set mainly in Queenscliff, on the Bellarine Peninsula. It is a mystery with a strong sense of place, in the small town tradition, contrasting an idyllic setting with the gravity of murder.

The principal characters are Chris Blackie, a rural police constable, and Anthea Merritt, a young, disgruntled urbanite, whose first appointment is as Blackie’s assistant. Alongside them, Through A Camel’s Eye introduces a cast of country townsfolk, ranging from Camilla Renfrew, reluctant witness to a crime and afflicted by the inability to speak; to farmer Frank Erwin; to a misanthropic ex-sailor, Brian Laidlaw; to another newcomer, the camel trainer Julie Beshervase. Blackie is an old-style policeman, who prides himself on knowing everybody in and around ‘his’ town.

The story opens with the theft of a camel and the discovery of a black coat in the sand hills, then moves by stages to a murder investigation.

The coat is found to have belonged to a missing woman, Margaret Benton, who lived, up until the time of her disappearance, at Swan Hill on the Murray River. Chris and Anthea begin to piece together what Margaret Benton was doing in Queenscliff, at the same time as continuing to look for Riza, the missing camel.

A bunch of schoolboys provides comic relief while the mystery deepens. A flood washes Margaret Benton’s body out of the Murray’s banks and it is apparent that she was beaten to death. Her husband is suspected, but there is little evidence to link him to the crime. Chris and Anthea are hampered by their lack of authority. Chris sends off reports, to which he receives brief replies, or no reply at all. Meanwhile Anthea, wishing she was back in Melbourne, begins to feel a grudging respect for her boss, and to develop a taste for detective work.

Chris finally unearths the stolen camel, and works out how Margaret Benton was killed in Queenscliff, then transported to the Riverina.

Through A Camel’s Eye takes two ‘ordinary’ police constables, of the kind who are usually portrayed as being at the bottom end of homicide inquiries, unable to contribute more than routine details, and moves these characters to centre stage. Chris Blackie and Anthea Merritt are intelligent, resourceful, and prove themselves to be far from ordinary when it comes solving the mystery of who killed Margaret Benton, and how.

The principal characters in Through a Camel’s Eye suffer from, or benefit by, sea change of one kind or another: Blackie, who, since his father drowned, hates the sea and is afraid of it, finds new sources of pride and self-esteem; Anthea Merritt overcomes her initial contempt for Queenscliff, while Julie Beshervase finds friendship there. Camilla Renfrew, who is fascinated by metamorphoses, both natural and unnatural, finds that her role as a witness is far from negligible, and learns that she has friends as well.

The first book  is called Through A Camel’s Eye and is set mainly in the coastal town of Queenscliff. (Watch my home page for previews and publication date.

My protagonists are Chris Laker, a rural constable, and his young assistant, Anthea Merritt, a disgruntled urbanite. Alongside them, Through A Camel’s Eye introduces a cast of country townsfolk, ranging from Camilla Renfrew, reluctant witness to a crime, to hostile newcomer and camel trainer, Julie Beshervase. A mystery takes shape, beginning with a black coat discovered in a paddock, and the theft of Julie’s baby camel. Farmer Erwin and a bunch of schoolboys provide comic relief while the mystery widens to include the coat’s owner, a missing woman whose body is subsequently discovered on the banks of the Murray.

The principal characters suffer from, or benefit by, sea change of one kind or another: Laker, who, since his father drowned, hates the sea and is afraid of it, discovers the possibility of a life elsewhere; Merritt overcomes her initial contempt for Queenscliff, while Julie finds friendship there. Camilla, who has lost the ability to speak and is harassed by her son, finds that her role as witness is an important one.