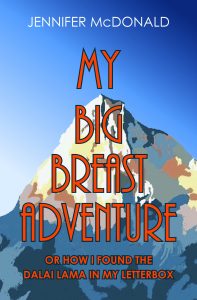 My Big Breast Adventure is a path breaking book which crosses the boundaries between a factual account of one woman’s breast cancer treatment, a philosophical discussion about what it means to be sick – and what it means to be well – and a celebration of humour in the face of adversity.

‘..when one has just had a cancer diagnosis and is about to undergo major surgery, laughter is at a premium and does not come easily,’ Jennifer McDonald writes.

Yet an early chapter heading reads ‘Cut, Poison, Burn and Laugh’ and time and again I found myself laughing while reading My Big Breast Adventure, which is based on the author’s blog posts and includes comments by readers. When I stopped to think and wipe my eyes, I asked myself why I was laughing when the author was going through hell. Answer: I was laughing because she made me laugh. McDonald’s humour is the buffer between her threatened sanity and the daily, weekly, monthly rounds of tests and chemo, radiation, more tests and more chemo.

There are many examples I could choose: here is one about hair loss.

‘I cut all of mine off before starting treatment even though my carers told me the hair probably wouldn’t fall out until about week three. Why wait to be bald I say? No word (or movement thankfully) on the eyebrows and lashes as yet. As my sister reminded me though, we McDonald girls come from staunch Celtic, Methodist stock which means we have eyebrows like John Howard and leg hair like the family dog.’

McDonald’s humour is like a dance with a quick, flicking two-step at the end. It is insouciant, irreverent, compassionate and warm. As readers would expect, anger and sadness, nausea and crushing fatigue are part of the story. They are acknowledged and dealt with. Jokes don’t take the dark side away; they make it into something more.

‘..I believe there are much worse things than death – being kidnapped by Boko Haram, having your business put into general administration, sitting by the bedside of a dying loved one, or living in Tony Abbott’s (Australian Prime Minister at the time of writing) electorate. Hang on, I do live in his electorate –what the FEC?’

FEC is an acronym for an extra chemo cocktail which McDonald took for nine weeks after her twelve-week standard chemo program was finished. For Father Ted fans, it’s also an irresistible reminder of Mrs Doyle offering a cup of tea to Father Jack. McDonald of course makes the most of this connection.

When discussing the importance of active acceptance, the author refers to Eckhart Tolle’s The Power of Now, and on the next page quotes a poem by an ancient Sufi mystic. Quotations and references abound, but they never feel intrusive in the text, or stuck on for effect. They don’t detract from the central story; they enrich it.

McDonald makes the point that, while, she has striven for accuracy in describing her treatment and its effects, both physical and emotional, My Big Breast Adventure is not a therapy manual. Though she refers throughout to aspects of traditional and complementary medicine, she stresses that her approach is personal; she is not setting out to tell others what to do when they receive a cancer diagnosis, or where to look for help and guidance. Yet I’m sure her book will be a help and guide to many, not least because of her unfailing sense of humour.