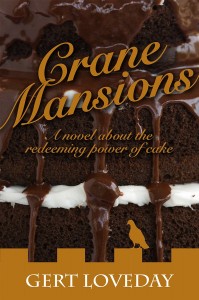 Gert Loveday had done it again with another wild, whacky and delicious comic novel.

Writing Is Easy, Gert’s debut novel, is a marvellous send-up of a writing workshop and the people to attend and run it. Crane Mansions, the place, is a school for foundlings – literally babies left in baskets – presided over by Dr Crane, who is obsessed by pigeons and has created an entire philosophy built around observing them. Crane leaves the running of the school to evil Marcel Hogue and a group called the Leaders. The children, the Learners, are half-starved and bullied, made to parrot nonsensical Texts, Precepts and Axioms, and punished for failing to interpret them correctly.

This sounds grim, and on one level it’s meant to be – a satire on the worst kind of boarding school. Like all good satirists, Gert exaggerates in order to make her point, and we laugh at the ridiculous posturings of the so-called teachers, and the pupils’ schemes to get the better of them, one way or another.

But Crane Mansions is more than a simple or straight-forward satire; it has at its heart a humanity and warmth that many satires lack. Milly Lord is apparently an indigent foundling like all the other children, though she arrives as a seven-year-old rather than a baby. Milly has memories of another life, and is wise and imaginative as well. She responds to Crane’s kindness, manifested at first by offerings of cake and a willingness to listen, and gradually the whole, cruel edifice of the school begins to crumble.

The cast of humorous villains includes Trish Vowles, out to swindle Milly if she can, her partner Sam, who, in an attempt to win her back turns himself into a furiously sun-tanned and bewigged buffoon, and Eustace Pugh and Sybilla Shaw, who start off on the side of the villains but are redeemed in time.

The cover tag line reads ‘a novel about the redeeming power of cake’ and while this is obviously a joke, it also holds its own kind of truth. Crane Mansions, while sending itself up continually, and tying itself in knot after knot, is redemptive in ways that only a special kind of comedy can be. So that even the crazy Thoughts of the headmaster come to mean more than they appear to, and the Pageant at the end becomes a celebration of human ingenuity and irrepressible sense of fun.

Crane Mansions is available for sale on Amazon