I’ve just come across a brilliant prose poem, ‘The Ships’ by Constantine Cavafy. Judging by the number of English translations on the official Cavafy website, the work is well known, but I’m glad to have found it, if a trifle later in life! 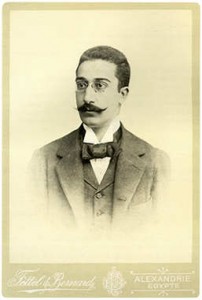 This photograph of the poet dates from around 1900.

‘From Imagination to the Blank Page. A difficult crossing, the waters dangerous. At first sight the distance seems small, yet what a long voyage it is, and how injurious sometimes for the ships that undertake it. The first injury derives from the highly fragile nature of the merchandise that the ships transport. In the marketplaces of Imagination most of the best things are made of fine glass and diaphanous tiles, and despite all the care in the world, many break on the way, and many break when unloaded on the shore. Moreover, any such injury is irreversible, because it is out of the question for the ship to turn back and take delivery of things equal in quality. There is no chance of finding the same shop that sold them. In the marketplaces of Imagination, the shops are large and luxurious but not long-lasting. Their transactions are short-lived, they dispose of their merchandise quickly and immediately liquidate. It is very rare for a returning ship to find the same exporters with the same goods…’ More

The prose poem is a wonderful evocation of the imagination as a ship and well worth reading in its entirety.

Constantine Cavafy was a Greek poet who lived most of his life in Alexandria and whose poetry went largely unrecognised in Greece during his lifetime. One of his best known poems is Waiting For The Barbarians.