The villanelle is a very old poetic form, medieval in fact, but it has become popular with contemporary poets in Australia.

In this blog post – the first of several I plan to write about poetry, which I love reading, but don’t write myself – I am focussing on the Australian poet Suzanne Edgar, who has this to say about the villanelle.

“The villanelle is an old Italian lyric form that was originally sung; it needs a consistent metrical musicality.  There are rules about its rhyme scheme, the refrain lines and their position in the poem.  The refrain needs to be strong enough to carry the emotional load of its repetition. My villanelle ‘After Drought’ was written in a joyful mood, during a downpour of summer rain.  It was included in Mike Ladd’s `Poetica’ program.” 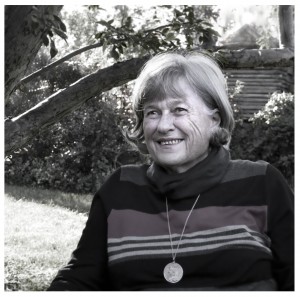 How sweet it is, the sound of falling rain
after years of unrelenting dry,
I thought I’d never hear the sound again.

The falling plays a favourite refrain
as soft as stroking, quiet as a sigh.
How sweet it is, the sound of falling rain

that soaks the bark and leaves a greenish stain
as if it had been coloured with a dye.
I thought I’d never hear the sound again.

Deep ruts are overflowing in our lane
and clouds are spreading froth across the sky.
How sweet it is, the sound of falling rain ‑

of steady raindrops humming in my brain
their plaintive rhyme; for no one will deny
how sweet it is, the sound of falling rain.
I thought I’d never hear the sound again.

‘After Drought’ was first published in Quadrant (June 2008).  It inspired a piece of textile art, exhibited by Lynne Taylor at Fairfield City Museum & Stein Gallery, N.S.W., in May 2009.  Ian MacDougall composed music for it which he’s sung (with viola, violin and guitar backing) and recorded on a CD.  This is in the School of Music library, A.N.U.  The CD was played on `Macca All Over` (ABC RN) on 3 March 2013.

The more sombre `Resolution’, in Edgar’s collection The Love Procession (Ginninderra Press, 2012), involves a domestic argument that goes around and around in circles.  “It should not be read as strictly autobiographical though,” says Edgar. “Matthew Arnold’s words are always on my mind: `The despotism of fact is unpalatable to the Irish.’ ” 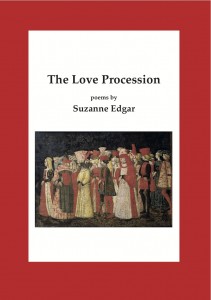 We’d argued through a long and foolish fight.
Though there was nothing useful left to say
it simmered in the evening’s muted light.

He’s always bloody sure he must be right,
the sort of man who’s bound to get his way –
we’d argued through a long and foolish fight.

I shoved our tell-tale budget out of sight
to read again some later, peaceful, day.
It simmered in the evening’s muted light.

He swore he had suspected I was tight,
repeated it was high time I should pay.
We’d argued through a long and foolish fight.

I took the bills and set each one alight
till they, and I, became an ashy grey
that simmered in the evening’s muted light.

Because I couldn’t face a sleepless night
I sold some shares and paid up straightaway.
We’d argued through a long and foolish fight
that ended in the evening’s muted light.

Edgar comments that “Stephen Fry’s The Ode Less Travelled (Arrow Books 2007) provides witty advice about the villanelle as a vehicle for  ‘rueful, ironic reiteration of pain or fatalism’. I recently finished the rather mournful ‘Lament’; it has the refrain,

‘Thinking, tonight, of all the books we’ve read,
I know we’ll miss ourselves when we are dead’.

Wendy Cope, however, has written some amusing examples, see ‘A Villanelle for Hugo Williams’, in her Family Values (Faber 2011). This poem displays the form’s rules in the guise of advice to another writer who’d got them wrong!

Other old French forms I’ve used are the rondel, ‘River and Rock’, and the triolet, ‘Malunggang’, both in The Love Procession. Once the formal pattern for such poems is in place I will overlay it with naturalistic or colloquial diction and tone, to avoid any effect of rigidity. This approach was also used in the petrarchan sonnet ‘Corteo d’amore’ which begins that book.

Poetry arises from watchfulness and alert waiting. There remains the exciting, rejuvenating work of refining. I would hate to be labelled a formalist, a modernist, or any other `ist’.  It would be restrictive, whereas I feel free to write in any way I like. I agree with Camus: ‘Poetry that is clear has readers. Poetry that’s obscure has commentators’. I mistrust the current vogue, particularly among academics and their imitators, for writing poems in which meaning is cerebral, convoluted and difficult. They write only for the page, have turned poetry into words.”