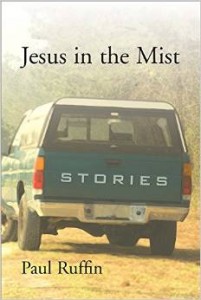 Reading Paul Ruffin’s collection, Jesus in the Mist, reminded me of the stories I’ve written over the years ‘from the edge of childhood’ – stories where the protagonist, a girl or boy, stands with one foot on the shifting soil of childhood, mind filled with a mixture of the fantastical and grimly real, while another foot stretches out across the huge crevasse of puberty.

It’s a subject that draws many writers, of course, but there was something in Ruffin’s stories that I recognised instantly. In ‘Time of the Panther’ a fifteen year old boy is set a challenge by his grandfather. The boy scoffs at the annual re-appearance of a panther, in whom the old men of the district believe. They tell stories about him on the porch of the only store, and around the stove in winter. The boy’s grandfather orders him to cross woods and a meadow in the middle of the night, places where the panther’s tracks were last seen.

The meaning of this story can’t be conveyed by an outline. Like the best short stories, its mysteries deepen the more you read. The clash between old wisdom and new knowledge can’t be reconciled; the best you can hope for is that the image will hold, and that the rhythm will not break.

In ‘The Well’, the task his grandfather sets the protagonist is the apparently simple one of cleaning a well. ‘In Search of the Tightrope Walker’ is about a man’s quest to find a girl he saw walking a tightrope in a carnival when he was a boy.

‘Oh Lord, how he remembered her skinny little body so tightly bound by the silken silver outfit she wore that every bone stood out, ribs and pelvis and vertebrae and high on her back the nubs of her sprouting wings…

Septembers the carnival came to the little Mississippi town near where he lived, as surely as football seasons, welcomed with an almost frenzy by the kids who were still too young to be swept up in the sweat and agony and glory of the gridiron. And even more the country kids who rode their bikes down dusty backroads to the glitter and the glare, then back out under the eery light of the moon or simple stars, penniless, with the sticky sweet of cotton candy still clinging to their faces and the throb of the midway dancing from ear to ear.’

In ‘The Queen’ it’s an old man’s youthful dream of building a ship and sailing away that become the centre-piece, while his children mock him and call him senile.

I think that, in my own stories on the theme, I’ve been groping my way towards something like this – an image comes to me, and a person uncertainly straddled between past and future, and I have to find a way to test their resilience.

Of course, Paul Ruffin’s stories don’t just deal with young people on the brink of becoming adults; they cover many other subjects as well. Ruffin’s sixth collection, ‘The Time the Waters Rose’ and Stories of the Gulf Coast will be published by the University of South Carolina Press later this year. He is Professor of English at Texas State University, 2009 Texas State Poet Laureate and publisher of The Texas Review. An interesting article about Ruffin’s books, and his work as a publisher and teacher can be found in the Huffington Post.