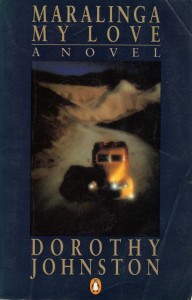 Maralinga My Love, my third novel, published in 1988, marked a new direction for me, in that the main characters are all men. Maralinga My Love is a father-son story set against the British atomic bomb tests at Maralinga in South Australia during the 1950s and 60s. Graham Falconer is a young, working-class Melbourne man who finds his life altered and his assumptions questioned by his involvement in a scientific experiment that has dramatic and lasting consequences.

One reviewer, Christopher de Bono, commented: ‘Maralinga My Love demonstrates the fulfilment of the promise shown in Johnston’s earlier novels and short stories. It is a novel that is distinctively Australian without being parochial. As a tale of the maturing of Graham Falconer and of the maturing of a nation, it is an outstanding success.