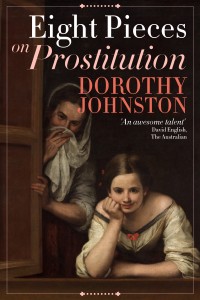 The stories in Eight Pieces on Prostitution span the whole of my writing life and include my first published story, ‘The Man Who Liked to Come with the News’, which Frank Moorhouse chose for his 1983 anthology, The State of the Art’. My first novel, Tunnel Vision, is set in a Melbourne massage parlour, and I have continued to return to the theme of prostitution in my novels and short stories, notably in The House at Number 10 and in this collection. ‘Where the Ladders Start’ is a long story, almost a novella, based around a suspicious death. Many of the stories are set in Canberra, Australia’s national capital, where I lived for thirty years before returning to Victoria’s Bellarine Peninsula.

My collection is available for $9.99 as an ebook from Authors Unlimited, part of the ASA website, as well as