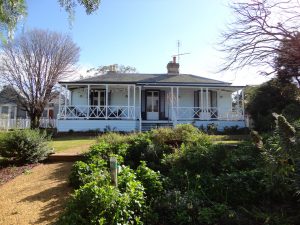 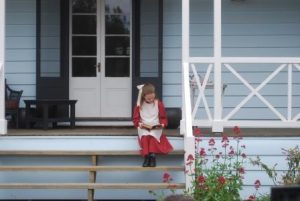 A few weeks ago I was contacted by Brigid Magner, a lecturer at RMIT who described her current project about literary commemorations in Australia. This project includes several houses where Henry Handel Richardson (Ethel, or Ettie as she was called when she was a young girl) once lived.

The two photographs at the start of this post are of 26 Mercer Street Queenscliff where the author lived in the late 1870s. The second is from a short play I wrote for history week 2016, and shows Ettie (played by Laura McMahon) reading on the veranda. The play took place in the garden, where the audience sat, and on the spacious veranda.

Talking to Brigid and thinking about her project got me wondering about literary pilgrimages and why people travel long distances to visit the homes of their favourite authors.

At the start of Flaubert’s Parrot, author Julian Barnes has his narrator ask, ‘Why does the writing make us chase the writer? Why can’t we leave well alone? Why aren’t the books enough?’

I sometimes fantasise about visiting Shrewsbury in England, where Ellis Peters set her Cadfael series. Cadfael is a Benedictine monk who lived at the Abbey of St Peter and St Paul in the 12th century. I imagine the cobbled streets and tiny, close-packed houses. And there would be some corners of the city where my imagination wouldn’t feel let down. But mostly I would have to go about in blinkers. And this is one problem, isn’t it, for literary pilgrims, that places where well-loved authors and characters have lived exist so vividly in our imaginations that we must be letting something go when we travel, perhaps thousands of kilometres, to see them with our own eyes.

One of my favourite pilgrimage stories concerns Mikhail Bulgakov’s The Master and Margarita, a novel combining a wonderful mixture of naturalistic and allegorical writing, in which the devil visits Moscow. There is supposed to be a tour where the tour guide takes visitors to see the bench the devil sat on. Now I don’t know whether or not this story is true; it’s simply one of many legends surrounding a famous work of literature. And I don’t care if it’s true, though if I were seriously considering paying for a tour I suppose I would like to find out. I love the story because it’s a mixture of imagination, humour, and the desire to connect with works of fiction that have moved and changed us.

I do not have to go far to visit one of the childhood homes of Henry Handel Richardson.

I can’t get inside 26 Mercer Street since the house is privately owned and not open to the public. I did go inside once, as a special favour, and was disappointed by the modern renovations. The front garden, though, is recognisably what it would have been in the 1870s, when the Richardson family lived there for about eighteen months. Such a short time, at least from an adult perspective. So much happened!

My script for the play features Ettie and her younger sister, Lil, left alone in the house to mind their father, while their mother, Mary, was learning book-keeping and Morse code at the post office. Mary had been told that if she could complete her training in six months she’d be given a job as a postmistress. She had to do something to support herself and the girls since Walter was incapable of doing so.

When the Richardsons arrived in Queenscliff, Walter was still talking about working as a quarantine officer and developing a private medical practice, but it quickly became apparent that he could do neither. Those eighteen months witnessed the rapid decline that ended with him being committed to a Melbourne mental asylum.

From Mercer Street, Walter wandered off and got lost, fell into vociferous arguments with shop-keepers and people in the street, had to be fetched home by his elder daughter, then aged eight years old.

All of this made Ettie furious. She compensated by finding ways to live in her imagination.

I like to walk up and down Mercer Street, paying tribute silently, anonymously. I’m not sure what kind of tribute I’m paying exactly, but that doesn’t matter. The house has always seemed to me a heart of darkness. Even on sunny days it seems surrounded by a cloud of dread. But then there’s Mary’s practical good sense and determination, Mary hurrying home in the dusk, a little figure dressed in black, not knowing what chaos she would find there, but persevering anyway, day by day. And there are the two girls, Ettie bouncing a ball repeatedly, doggedly, against a blind wall of the house – so the legend goes – while she made up stories that took her as far away as possible from Queenscliff.

And my heart goes out to them. It doesn’t matter how often I trudge past, the feeling is the same. Childhood homes are like that, mostly, though a lucky few escape – compounds of misery and hope and desperate fantasies. It’s just that this small girl, whose presence I feel so strongly, went on to become Henry Handel Richardson, and wrote about her family, and created a masterpiece.