Well, the countdown has begun in earnest now, to the publication of my third sea-change mystery and twelfth novel, Gerard Hardy’s Misfortune. 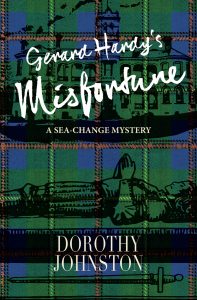 A few days ago, I was asked what clan tartan the cover designer, John Cozzi, had used.

It’s a hybrid, based on the Johnston, my family’s tartan on my father’s side, but with brown lines added. Those lines, and the pale green ones as well, suggest bars on a cell to me, and will perhaps to others too, when they read the story. My murder victim, Gerard Hardy, is found in a cell-like room at the end of a basement corridor, underneath Queenscliff’s historic Royal hotel.

The title is a play on The Fortunes of Richard Mahony and Hardy is a Henry Handel Richardson scholar, in Queenscliff to conduct some unorthodox research.

As I’ve said in previous posts, I find Richardson’s a compelling presence still, just up the hill from the Royal, at 26 Mercer Street, where she lived as a small girl with her mother and father and her sister, Lil.

Gerard Hardy’s Misfortune isn’t an historical novel, but the history of the Richardson family does play an important part.

And the glue that holds the whole thing together is provided by the main characters in my first two sea-change mysteries, Chris Blackie and Anthea Merritt.